Despite the diversity of imagery, subject matter, methodology and technique used by the eight artists of the Full Circle art Collective, a remarkable cross-over of shared themes and iconographies is made visible in the wide visual spectrum of this exhibition.

intersections:
a forum where encounters happen and discoveries are made

I was honoured to be invited to participate in Heartfelt 2013 when the Vancouver Print Room revisited Torrie Groening’s 1997 printmaking project and touring exhibition, addressing the timeless theme of love. Heartfelt 2013 included the prints created for Heartfelt 1997 by thirteen notable British Columbia artists, including Jack Shadbolt, Vikky Alexander, Eric Metcalf and Ed Pien; works from Groening’s ongoing series of Valentine prints created over the past 20 years; selected works from the Vancouver Print Room’s collection, which include San Francisco artists: Deborah Oropallo and Katie Gilmartin; and existing and newly created love-themed pieces from guest artists. 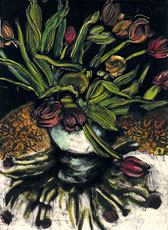 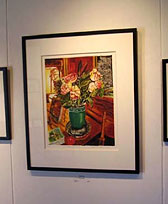 Detail:
Shoreline Treasures and Things That Grow Between
Oil Monotype
20″ × 42″

Invitational show to commemorate the 100th birthdays of West Vancouver and the Ferry Building. 100 artists, with ties to West Vancouver, were each given a 12″ × 12″ canvas and asked to paint their favourite memory of West Van. Mine is of a seagull at Ambleside Beach; a place where I spent a lot of time growing up and one of my favourite spots in the world. 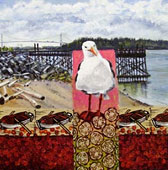 Life seems to start from the sweep of the sky and work towards the many layers of the ocean waters, the tidal debris, the sand, the grasses, the barnacles that cover the underside of the pilings on the pier, the green algae that cover the rocks at the edge of the shoreline exposed by waves over time. I grew up on this shore; a curious seagull standng by. We read the ends of scattered logs as layers of time and history. They tell us that time is piling up, or drifting off, as if watching it peel away. It reminds me of how the ocean engulfs, covers over, then exposes the forces of life and my history with Ambleside Beach and the West Coast.

Despite the diversity of imagery, subject matter, methodology and technique used by the eight artists of the Full Circle art Collective, a remarkable cross-over of shared themes and iconographies is made visible in the wide visual spectrum of this exhibition.

intersections:
a forum where encounters happen and discoveries are made

“above and below”
Gallery 2, Grand Forks, BC

“above and below” marks my second solo exhibition in Grand Forks, BC. The exhibition consisted of 28 monotypes and drypoint etchings based on the concept of above and below the earth. The organic life force that breathes below and above the surface of the earth provided the focus for this exhibition, which celebrates the regenerative spirit of nature in its insistent cyclicality, and its powers of physical, spiritual and universal inter-connectedness.

Dundarave Print Workshop + Gallery on Granville Island in Vancouver, BC is 40 years old this year and we are inviting you to celebrate this anniversary with us. This milestone in our history will be celebrated through a juried exhibition of past and present members’ work this coming May and June of 2011 in our gallery. There will be 40 works from 30 printmakers. 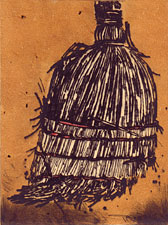 When “layered” first came up as a concept for our show the Four Heathers Group wondered—layering what? From all our collaborative experiences, we easily agreed on a West Coast theme for “Lay/er/ed”. I began to incorporate west coast imagery in my paintings and my monotypes from photos I took at Long Beach, British Columbia. I used this imagery as metaphors for one’s own life and history.

Time—the temporal dimension that embraces both a moment and an eternity. In order to reflect on the passage of time, the artists have chosen a vision that despite its pictorial stillness offers space for the intimate sensing of the infinite tense.

The work in this travelling exhibition is a collection of 11 original prints created through various printmaking mediums. These limited edition works also form part of a suite of prints and can be purchased as a complete set in a portfolio as shown or individually as exhibited; framed or unframed. 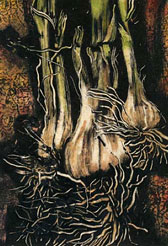 Time Below II
Oil Monotype Chine Collé
Passage of Time Portfolio may be purchased individually or in the complete set of 11 prints
For more information,
see Full Circle Art Collective.

Nature connects our work; a shared name and profession connects us to each other. Heathers (calluna vulgaris) prosper in challenging conditions, with a tenacity often mirroring artist’s lives.

To commemorate the thirty year anniversary of Malaspina Printmakers Society, 30 artists from societies past and present have been commissioned to create works on paper—and an edition of prints that fit within the confines of 30 centimetres by 30 centimetres. 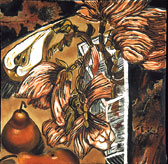 The Trilateral Print Exchange Exhibition is hosted by SPA, in Japan. Malaspina Printmakers Society from Vancouver, Canada and Grafisch Atelier Utrecht from Utrecht, Holland are the co-hosts. Heather Aston has 8 pieces touring in this exhibition that includes 20 artists from Canada, 20 artists from Holland and 25 artists from Japan.

The Exhibition is held under the theme “Re-Identification”. It is a good opportunity for both the artists and the audience to see personal reflection and re-assessment, that is, to re-identify themselves through the prints created by the artists from the three countries.

HEATHER ASTON IS ONE OF TWO ARTISTS SELECTED TO REPRESENT MALASPINA PRINTMAKERS AT THE OPENING EVENTS IN NAGASAKI AND KOCHI, JAPAN IN APRIL 2006

below and above
Malaspina Printmakers Gallery
oil monotypes by Heather Aston
mixed media prints by Rina Pita
May 24 – June 19, 2005
Opening Reception: May 26, 2005 7 – 9pm

The organic life force that breathes below and above the surface of the earth provides the focus for this exhibition, which celebrates the regenerative spirit of nature in its insistent cyclicality, and its powers of physical, spiritual and universal inter-connectedness. 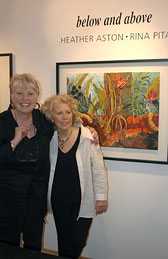 Opening reception of “below and above” May 26, 2005 Malaspina Printmakers Gallery, Granville Island, Vancouver, BC.
L to R: Heather Aston, Rina Pita